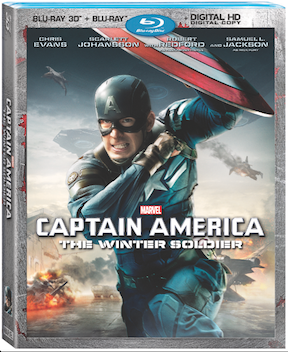 Own The Movie That Changed Everything, along with Exclusive Bonus Features!
Get it First on Digital 3D and Digital HD, plus Disney Movies Anywhere August 19th, and on 3D Combo Pack, Blu-ray, DVD and On-Demand September 9th

BURBANK, Calif. May 30, 2014— From the studio that brought you the biggest Super Hero movie of all time, Marvel’s The Avengers, comes this year’s #1 live-action adventure, Marvel’s Captain America: The Winter Soldier, available early on Digital 3D and HD August 19th, 2014, and on 3D Blu-ray Combo Pack, Blu-ray, DVD and On-Demand September 9th, 2014, from Walt Disney Studios Home Entertainment. Saluted by critics as “action-packed” (NY Daily News), “thrilling” (Cinema Blend) and “better than The Avengers” (Access Hollywood), this blockbuster second chapter in the Captain America series teams Marvel’s First Avenger, Captain America, with Black Widow and new ally The Falcon as they battle their most mysterious and powerful enemy yet, the Winter Soldier.

Bring home the movie that changed everything and expand your Marvel collection in the following formats with bonus features as listed:

ABOUT MARVEL’S CAPTAIN AMERICA: THE WINTER SOLDIER:
After the cataclysmic events in New York with The Avengers, Marvel’s Captain America: The Winter Soldierfinds Steve Rogers, aka Captain America, living quietly in Washington, D.C. and trying to adjust to the modern world. But when a S.H.I.E.L.D. colleague comes under attack, Steve becomes embroiled in a web of intrigue that threatens to put the world at risk. Joining forces with Natasha Romanoff aka Black Widow, Captain America struggles to expose the ever-widening conspiracy while fighting off assailants sent to silence him at every turn. When the full scope of the villainous plot is revealed, Captain America and the Black Widow enlist the help of a new ally, the Falcon. However, they soon find themselves up against an unexpected and formidable enemy—the Winter Soldier.

Captain America: The Winter Soldier is presented by Marvel Studios. The executive producers are Louis D’Esposito, Alan Fine, Victoria Alonso, Michael Grillo and Stan Lee. The film set a new record for the all-time biggest April opening weekend with $95 million at the domestic box office upon its release on April 4, 2014. It is distributed by Walt Disney Studios Motion Pictures.
ABOUT MARVEL ENTERTAINMENT, LLC
Marvel Entertainment, LLC, a wholly-owned subsidiary of The Walt Disney Company, is one of the world's most prominent character-based entertainment companies, built on a proven library of more than 8,000 characters featured in a variety of media over seventy years.  Marvel utilizes its character franchises in entertainment, licensing and publishing.  For more information visit marvel.com.  © MARVEL

ABOUT DISNEY MOVIES ANYWHERE (DMA):
Disney Movies Anywhere (DMA) is a cloud-based digital movie service that offers a hassle-free way for consumers to buy, watch, and manage Disney digital content across platforms and devices via the easy-to-use DMA app or atDisneyMoviesAnywhere.com. A DMA-eligible digital title purchased from an iTunes-connected account or redeemed in DMA will be accessible in a user’s DMA and iTunes lockers. There are currently over 400 films from Disney’s rich history available through DMA for streaming and download, including Disney Branded Animation, Disney Live-Action, Pixar, and Marvel titles, along with exclusive, original content. For more information or to redeem Digital Copy codes to build your library and earn Disney Movie Rewards Points for digital purchases, visit http://www.disneymoviesanywhere.com.

ABOUT THE WALT DISNEY STUDIOS:
For 90 years, The Walt Disney Studios has been the foundation on which The Walt Disney Company was built. Today, the Studio brings quality movies, music and stage plays to consumers throughout the world. Feature films are released under the following banners: Disney, including Walt Disney Animation Studios and Pixar Animation Studios; Disneynature; Marvel Studios; Lucasfilm; and Touchstone Pictures, the banner under which live-action films from DreamWorks Studios are distributed. The Disney Music Group encompasses the Walt Disney Records and Hollywood Records labels, as well as Disney Music Publishing. The Disney Theatrical Group produces and licenses live events, including Disney on Broadway, Disney On Ice and Disney Live!