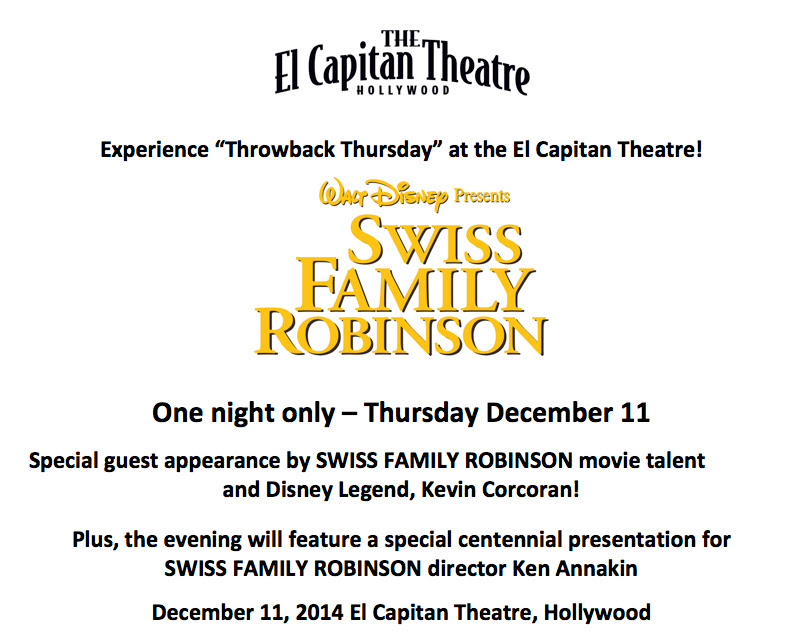 General Admission Tickets are $10.00 and include 39 oz. popcorn and 12 oz. twist top beverage bottle of choice. VIP tickets are $20.00 and include a Reserved Seat, 64 oz. El Capitan Souvenir Popcorn Bucket with Lid and 20 oz. Twist Top Bottle of Choice. Tickets are on sale now and available at the El Capitan Theatre (6838 Hollywood Blvd.), online at www.elcapitantickets.com or by calling 800-DISNEY6.

Commenting on the announcement, Lylle Breier, Senior Vice President, Worldwide Special Events for Walt Disney Studios Motion Pictures, said, “El Capitan Theatre guests were asked to pick their favorite 1960’s Live Action Disney movie for the upcoming THROWBACK THURSDAY and the votes were so close, that the December 11th film will be SWISS FAMILY ROBINSON. We created “Throwback Thursday” as a way for all of our Facebook fans, and Disney fans everywhere, to enjoy a classic Disney film on the big screen in the best place possible - the El Capitan Theatre! Facebook fans vote from a list of classic Disney films and the winning film is shown in our historical El Capitan Theatre.  For this THROWBACK THURSDAY, El Capitan guests will also see behind the scene photos and learn about the making of the infamous tree house from Disney Archivist Rebecca Cline.“

SWISS FAMILY ROBINSON is a 1960 British-American feature film starring John Mills, Dorothy McGuire, James MacArthur, Janet Munro and Tommy Kirk in a tale of a shipwrecked family building an island home, based on the 1812 novel Der Schweizerische Robinson (The Swiss Robinson) by Johann David Wyss. The film was directed by Ken Annakin, shot outside of London and was the first wide screen Disney film shot with Panavision lenses.

A family on their way to New Guinea is chased by pirates into a storm. The captain and crew abandon the ship leaving the family shipwrecked off an uninhabited island. Father (John Mills) and his two eldest sons Fritz and Ernest (Tommy Kirk and James MacArthur) salvage as much as they can from the wreck. They construct a tree house home on the island while the youngest boy Francis (Kevin Corcoran) investigates the wildlife and starts an impressive collection of animals including a young elephant, a capuchin monkey and two Great Danes. The boys build inventions to provide modern amenities to the family such as drawing water and preserving food. Mother (Dorothy McGuire) prays to be rescued.