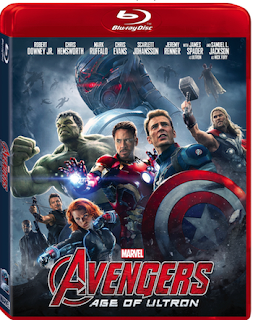 In honor of Marvel’s Avengers: Age of Ultron out on Digital 3D, Digital HD and Disney Movies Anywhere, Today September 8th we have these fun clips and Talent Q&A to share with you! You can also take a look at the Marvel Cinematic Universe with the bonus feature “Connecting the Universe” exclusively in DMA. Additionally, in time for today’s early digital release of one of the biggest movies of the year, Disney announces significant partner and device additions to its cloud-based digital movie service, Disney Movies Anywhere (DMA), with all new partners including Amazon Video and Microsoft Movies & TV who now join iTunes, Google Play and Vudu in the free Disney Movies Anywhere app - continuing to expand upon its promise to provide more ways to buy and watch your favorite Disney, Pixar, Marvel and Star Wars movies at home or on the go.

AN INTERVIEW WITH SCARLETT JOHANSSON FOR THE IN-HOME RELEASE OF MARVEL’S AVENGERS: AGE OF ULTRON 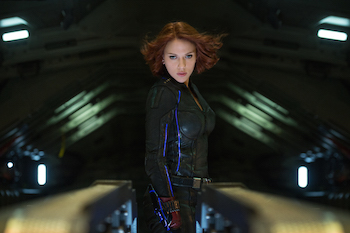 With the Blu-ray, Digital HD and DVD of Marvel’s Avengers: Age Of Ultron about to be released, we talk to actors Scarlett Johansson– ‘Black Widow’ in the movie – to discover their thoughts on the action-packed adventure…

How would you describe The Avengers at the beginning of Marvel’s Avengers: Age Of Ultron? And how has the world changed since the first movie?

Scarlett Johansson: It really is business as usual at the beginning of the film, but the world is aware of the universe in a way that they weren’t in The Avengers. The common man knows the vocabulary of aliens and space travel. Before the battle in New York, The Avengers had a stealthy approach and S.H.I.E.L.D. certainly had that as well – but now we’re being judged in a different way. Everybody is watching us, so it’s a different playing field.

What personal challenges do The Avengers face in the movie?

Scarlett Johansson: Every one of The Avengers has come to the table with a lot of baggage. None of us chose this job; the job chose us – and their reluctance to wear the superhero hat makes for very interesting backstories. We all have our histories, which we get to explore a little bit, and I think the audience is going to absolutely love it. It makes the audience that more invested in our interpersonal relationships and also the future of these characters, which is pretty cool.

How would you describe the romantic relationship that develops between Black Widow and Bruce Banner in the movie?

Scarlett Johansson: These characters have what I always thought was an unlikely love story that grows between them – but it’s actually rooted in a very likely love story because they have a lot in common. It’s a very complicated relationship. It’s an impossible love that seems unlikely but isn’t.

How does Black Widow tame The Hulk?

SCARLETT JOHANSSON: How does Natasha tame the beast? That’s a very good question. It’s interesting that she does it with a human touch. I would imagine your every instinct is telling you not to touch The Hulk. He’s not the person you grab and give a bear hug to. And yet, somehow, he’s a raging person that needs a tender bear hug. He needs someone to remind him that he’s grounded and he has someone with him. He needs someone to be present to tell him to come back to himself. She develops a therapeutic thing with the Hulk, and I think that probably comes from her own maternal instinct.

How does it feel to play a female superhero in a male dominated world, Scarlett?

SCARLETT JOHANSSON: I just go through the script and look at my parts – and those are the only parts I read. What’s great about playing this character is that she is based on something deep and something I could hold onto. She’s very real. She’s experienced a lot of trauma and she’s never really been able to make active choices for herself – but now she is and she’s ready for it.

You were pregnant when you shot the movie. How did you prepare for the physical role and the challenging motorcycle scenes?

SCARLETT JOHANSSON: I don’t think you’re allowed to ride a motorcycle when you’re pregnant. I embarrassingly rode some sort of mechanical bull-type of motorcycle, which goes nowhere and doesn’t look cool at all! But we had some very professional and amazing motocross work being done that makes Black Widow look like a total badass.

How much do you enjoy the physical aspect of the role?

SCARLETT JOHANSSON: I’m very fortunate that there’s a team around me that is super-supportive in helping all of Widow’s fight moves and badass motorcycle riding. It takes a lot of choreography and team spirit. Every film is exciting because I get new tools and cool new things to do. Luckily, [director] Joss [Whedon] writes me some badass moves that make me look epic. It’s awesome.

How would you sum up Black Widow’s journey in the movie?

SCARLETT JOHANSSON: At the beginning of Avengers 2, there’s some sense of The Avengers being a well-oiled machine. Finally, the introductions are over and we’re at work, we’re digging our heels in. At the end of Avengers 2, I think Widow has let her guard down and she is hopeful for something. I think she had this moment of false hope where she felt like she put in the work and there should be some kind of personal payoff – and she was ready to accept it. Then she realizes that her calling is a greater one and that’s not necessarily something that she’s thrilled about, but that’s what is most heroic about her. She accepts the call of duty, even at her own personal loss. I think it’s an interesting place to leave her, because there are many different directions to go. Is she going to be able to withstand this huge weight that’s bearing down on her or is she going to crack under it and crumble? I guess we’ll have to wait and see, right?

Would you like to see a solo Black Widow movie to tie up these loose ends?

A Black Widow movie will be cool. Sure. I’m always excited to get that cat suit on!

AN INTERVIEW WITH CHRIS HEMSWORTH FOR THE IN-HOME RELEASE OF MARVEL’S AVENGERS: AGE OF ULTRON

With the Blu-ray ™, Digital HD and DVD of Marvel’s Avengers: Age Of Ultron about to be released, we talk to actor Chris Hemsworth– who plays Thor in the movie – to discover his thoughts on the action-packed adventure…

What’s new about your characters in Marvel’s Avengers: Age of Ultron?

CHRIS HEMSWORTH: In Age Of Ultron, we see a more grounded, earthly version of Thor than we have in the past. It is nice because there are a few more opportunities to showcase some humor and see him in some casual gear instead of the red cape and armor.

How does it feel to portray a different version of the character compared to the Thor we’ve seen in previous movies?

CHRIS HEMSWORTH: I wanted to get back to the fun he had in the first film. I wanted to make him a little more grounded. I wanted to humanize him a bit. It’s very easy for these characters to become un-relatable and exist off in the stratosphere – but this was about making him more human. You can see this in one of the first scenes where the rest of The Avengers are trying to pick up his hammer in casual clothes. You think, ‘What do these guys do when they’re not saving the world?’ Well, now you know. That was fun for me. Any time we got to do things like that and to play around, that was the best part for me.

What’s Thor’s role in The Avengers in the new movie?

CHRIS HEMSWORTH: He’s a central part of the team now and there’s certainly a unity that they’ve all formed now as a group. They are solid. Thor sees the bigger picture of the current conflict that’s going on. There’s the initial battle, which they’re all involved in, but Thor uses his Asgardian knowledge and starts to tap into some otherworldly possibilities and threats that he thinks are coming.

What was it like to welcome new cast members to the superhero cast?

CHRIS HEMSWORTH: Joking aside, they were awesome. It was cool to have new people on set. You almost get too comfortable when you know everyone’s rhythms – but then a few new people are thrown in the mix and it gets disrupted in the best way. That’s why I think people love this film even more so than the first one. I love the new additions.

Ultron [played by James Spader] is another new character introduced in Marvel’s Avengers: Age Of Ultron. How would you describe the character?

CHRIS HEMSWORTH: The character of Ultron was one of the first times on any film where I had really no idea what that character was going to look like and how that performance was going to be played out. But the first time I saw James [Spader] perform in character, it just all made sense. The writing is all very tricky in terms of his speech cadences and rhythms. He also has sarcasm and irony to him, yet is highly intelligent. It’s a beautiful mix.

What was it like to have James Spader on the set?

CHRIS HEMSWORTH: I remember the first time he came on set, too. He did this big monologue and when he was done we all applauded and forgot our lines because we were so captivated by what he was doing.

How would you describe the look of Marvel’s Avengers: Age Of Ultron?

CHRIS HEMSWORTH: We’ve gone to far more locations than we’ve ever been to before and we’ve covered more ground than ever before, so aesthetically it’s going to be a mash-up of a whole lot of different locations and styles and images. Everything has been dialed up. Even the complexity of the story has gone deeper. We’ve seen all these characters evolve in the individual films, but to see them come together a second time is pretty exciting.

The start of the movie sees the superheroes working together in The Avengers Tower. What was the set like for those scenes?

CHRIS HEMSWORTH: The Avengers Tower was an incredible set. In fact, it was one of the most impressive sets I’ve ever been on. It’s Tony Stark’s house, so it had to be big, high-tech and flashy – and it was. It was also the first set that the entire group shot on together, so it was nice to be in that kind of setting to shoot the party scene there and all of us be together and catch up.

Who were your favorite superheroes when you were growing up?

CHRIS HEMSWORTH: Superman was probably the only film like that I had seen when I was growing up. It’s the one that sticks out for me. Iron Man hadn’t been created yet, or Captain America, or Hulk, or Black Widow, or Vision.