Aladdin Diamond Edition On Blu-Ray Today And A ~~Giveaway~~ 5 Winners!!

Discover How Three Wishes Can Change Everything in Disney’s Timeless Adventure
for the Whole Family Available for the First Time on Blu-ray™ and Digital HD! 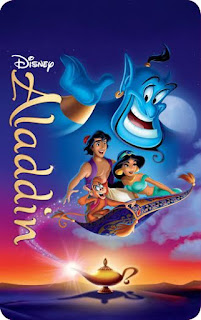 "You ain't never had a friend like me!!"  One of my all time favorite songs!!  I remember when Aladdin first came out, and how excited my siblings and I were to see it.  Jafar is so evil, and who didn't think Princess Jasmine was a little too spoiled!!

To this day, I still wish that if I rubbed a lamp I would get some wishes.  Even just one would be great!!

Now Aladdin has come out of the fault and is available on Blu-Ray and Disney Movies Anywhere.  With special bonus features like an interview with John Musker and Ron Clements (they are awesome!!  I got to meet them a couple years ago!!) and extra bonus' like a deleted song from Jafar, you need this DVD!!

Synopsis:                             Disney’s beloved masterpiece will make your heart race and your spirit soar. Experience the laughter, adventure and Academy Award®-winning music (1992: Best Music, Original Song, “A Whole New World,” Original Score) for the first time on Blu-ray and Digital HD. And now Aladdin shines even brighter with never-before-seen tributes to the enchanting talent of Robin Williams, the “Genius behind the Genie

Voice Cast:                         Robin Williams (Jumanji, Night at the Museum) as The Genie, Scott Weinger (TV’s “Full House”) as Aladdin, Linda Larkin as Jasmine, Gilbert Gottfried (TV’s “Saturday Night Live”) as Iago,Jonathan Freeman (Aladdin: the Musical on Broadway) as Jafar, Douglas Seale (Rescuers Down Under, For Love or Money) as Sultan and Frank Welker (Mulan, The Smurfs 2) as Abu.

Genie 101 - Our host, Scott Weinger (the voice of Aladdin), takes us through the various transformattions of the famous (and formerly famous) celebrity references of the Genie.

Ron & John: You Ain't Never Had a Friend Like Me - Directors John Musker & Ron Clements sit down and discuss the experiences of their long-running partnership together at Disney.

Aladdin: Creating Broadway Magic - Join host Darren Criss as we take "a new fantastic point of view" at the story of how Aladdin went from a classic Disney animated film to become Broadway's smash hit with Composer Alan Menken and others.

Classic Bonus - ALL classic bonus from the original DVD release

ABOUT DISNEY MOVIES ANYWHERE (DMA):
Disney Movies Anywhere (DMA) is an engaging and family-friendly cloud-based digital movie service that makes it simple to buy your favorite Disney, Pixar and Marvel movies once and watch them anywhere.  With DMA you can explore Disney’s library of over 400 eligible digital movies, discover hours of new and exclusive short-form content, and watch your digital movies from the comfort of the living room or across multiple mobile devices.   In addition, you can redeem Digital Copy codes found in Disney, Pixar and Marvel Blu-rays and DVDs, as well as earn Disney Movie Rewards points with every digital purchase.  Sign up and access Disney Movies Anywhere for free on DisneyMoviesAnywhere.com and through the Disney Movies Anywhere iOS and Android apps. Users can then simply connect their iTunes, Google Play and/or VUDU at VUDU.com/DMA accounts to begin enjoying their Disney, Pixar, and Marvel digital movie collections across platforms and devices.

WALT DISNEY ANIMATION STUDIOS
Combining masterful artistry and storytelling with groundbreaking technology, Walt Disney Animation Studios is a filmmaker-driven animation studio responsible for creating some of the most beloved films ever made. Located in Burbank, WDAS continues to build on its rich legacy of innovation and creativity, stretching from the first fully-animated feature film, 1937's Snow White and the Seven Dwarfs, to 2013's Academy Award®-winning Frozen, the biggest animated film of all time. Among the studio's timeless creations areCinderella, Sleeping Beauty, The Jungle Book, Beauty and the Beast, The Lion King, Tangled and the Oscar®-winning Big Hero 6.

Would you like a copy of the movie to add to your collection??  I am very happy to be able to give to five lucky people a digital copy of Aladdin.  You can add this to your Disney Movies Anywhere account, and watch the movie anywhere!!

Enter below using the Rafflecopter form, and good luck!!