The Lion Guard: Return Of The Roar On DVD Now!! 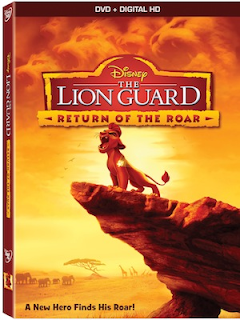 Continuing the Epic Storytelling of “The Lion King,” Join Simba and Nala's
Second-Born Cub, Kion, and His Lion Guard Team as They Embark on
Adventures Together throughout the Pride Lands!

Synopsis:                                Meet Kion, second-born cub of Simba and Nala, as he assumes the role of leader of “The Lion Guard,” an elite team of animals tasked with preserving the Pride Lands. Follow him as he assembles a group of unlikely heroes: Bunga the honey badger, Fuli the cheetah, Beshte the hippo and Ono the egret. Join them on a thrilling adventure as they use their unique abilities to defend the Pride Lands from predators and maintain balance within the Circle of Life. Bursting with humor, music, beloved characters and heart, The Lion Guard: Return Of The Roar is a must-own for the entire family!
Voice Cast:                             James Earl Jones and Ernie Sabella reprise their roles from "The Lion King" as Mufasa and Pumbaa, respectively, alongside Rob Lowe ("The Grinder") as Simba and Gabrielle Union ("Being Mary Jane") as Nala; Max Charles ("The Amazing Spider-Man 2”) stars as Kion; Joshua Rush ("The Adventures of Puss in Boots") as Bunga; Atticus Shaffer ("The Middle") as Ono; Diamond White ("Sofia the First") as Fuli; and Dusan Brown ("Blaze and the Monster Machines") as Beshte.