Sofia The First: The Secret Library On DVD June 7th 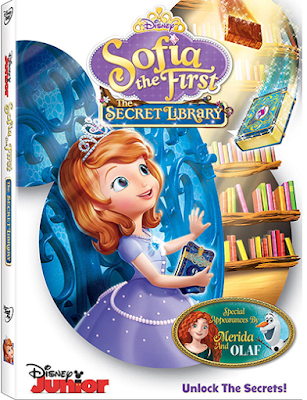 Join Sofia on her adventures into a world of magical books in Disney Junior’s hit series Sofia the First: The Secret Library on DVD June 7th! This new DVD features Sofia teaming up with Merida from Disney’s “Brave” and Olaf from Disney’s “Frozen”! It includes 4 episodes for over an hour and half of princess adventures! Plus a FREE Sofia Necklace Inside!

SOFIA THE FIRST: THE SECRET LIBRARY

Synopsis:                      Sofia's Aunt Tilly returns to give her a gift that will unlock a secret world and appoint Sofia storykeeper of magical books without endings in "Sofia the First: The Secret Library." Follow along as Sofia pursues adventures that will finish the narratives, including rescuing Minimus' brother from an evil prince and setting out on a mission to stop Miss Nettle from stealing all the beautiful snowdrop flowers from the wintery kingdom of Freezenberg. Merida from Disney•Pixar's "Brave" and Olaf from Disney's "Frozen" make special appearances.