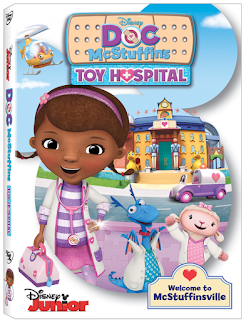 Includes over 2 Hours of New Adventures and New Songs,
Plus a FREE Exclusive Toysponder Bracelet!

Synopsis:                             Join Doc as she expands her practice from the backyard clinic to the magical new world of McStuffinsville, where she will carry on a family tradition by becoming Chief Resident of McStuffins Toy Hospital. After Grandma McStuffins shares the news that she too has the ability to bring toys to life, she transports Doc and her friends to McStuffinsville, a magical world made up entirely of toys.  There, Doc appoints Lambie in charge of the toy nursery, Stuffy on vet duty, Chilly as receptionist and Hallie as head nurse.

Also featured are four episodes highlighting the McStuffins' family experience as they encounter the joys of adoption after Mom and Dad McStuffins announce that they are adopting a baby. Storylines focus on a variety of emotions and situations young children can encounter when a new baby arrives in the family.
Cast:                                      Laya DeLeon Hayes as Doc McStuffins; Lara Jill Miller as Lambie; Robbie Rist as Stuffy;Loretta Devine as Hallie; Jess Harnell as Chilly; Andre Robinson as Donny McStuffins; Kimberly Brooks as Mom McStuffins; Gary Anthony Williams as Dad McStuffins; and Dawnn Lewis as Grandma McStuffins.
Executive Producer:         Chris Nee

My boys love Doc McStuffins!!  They have been watching her since day one!!  Doug was very excited when the newest DVD arrived.  Doc McStuffins is now expanding into McStuffinsville and bringing some great friends with her!!

Along with the release of the DVD, Disney has also released a really cool Hospital toy set.  You get Lambie, Doc's bag and all the stuff you could ever need to take care of your furry friends.  The stethoscope talks to let you know how your patient is doing.  This would make a great Christmas gift for that special Doc fan on your list. 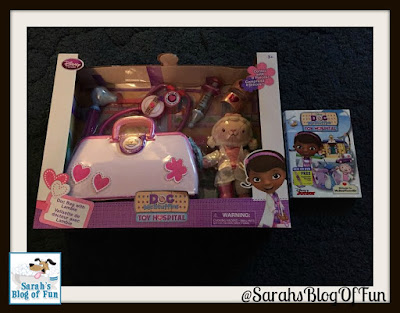 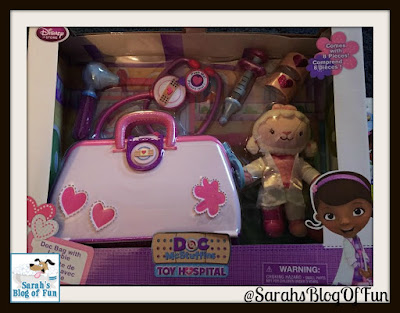 You can purchase both the DVD and the Toy Hospital set at the Disney Store or just the DVD through Amazon!!

Would you like to win a copy of the DVD, and the Toy Hospital set??  Enter below using the rafflecopter form and good luck!!