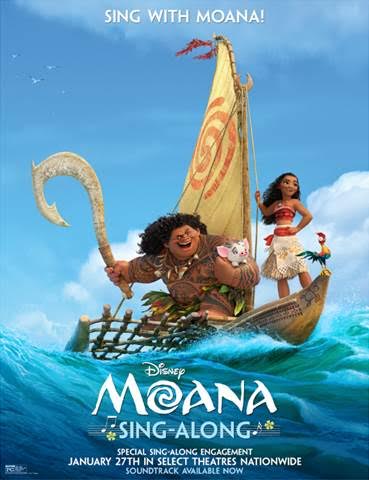 Fans are invited to warm up those vocal cords and set sail with an all-new sing-along version of MOANA launching in more than 2,000 theaters nationwide on Jan. 27.

MOANA audiences were swept away by the film’s original songs and score from a dynamic team that includes Tony®-, Emmy®- and Grammy®-winning songwriter Lin-Manuel Miranda (Pulitzer Prize- and Tony-winning “Hamilton,” Tony-winning “In the Heights”), Mark Mancina (“Tarzan,” Broadway’s “The Lion King”) and Opetaia Foa‘i (founder and lead singer of the award-winning world music band Te Vaka).

The sing-along version of MOANA includes the full feature film with on-screen lyrics, so audiences can belt out the words to their favorite songs, such as the Golden Globe®-nominated “How Far I’ll Go.” Moviegoers can check local listings for showtimes and theaters; the sing-along run will vary by location.

Walt Disney Animation Studios’ 56th animated feature opened domestically on Nov. 23, 2016, becoming the No. 2 Thanksgiving debut ever with $82 million. The film continues to delight audiences around the globe, earning more than $225 million domestically and $450 million worldwide to date. The film has a 95% score on Rotten Tomatoes and an “A” CinemaScore.

MOANA has received, thus far, nominations for BAFTA, PGA, Golden Globe® and a Critics’ Choice Movie Award for best animated feature. The film’s uplifting soundtrack has dominated the music charts for more than six weeks, peaking at No. 1 on the iTunes Albums chart; it is currently No. 1 on Billboard's Top Album Sales chart and No. 2 on the Billboard 200 album chart. The soundtrack is available wherever music is sold and at streaming services.